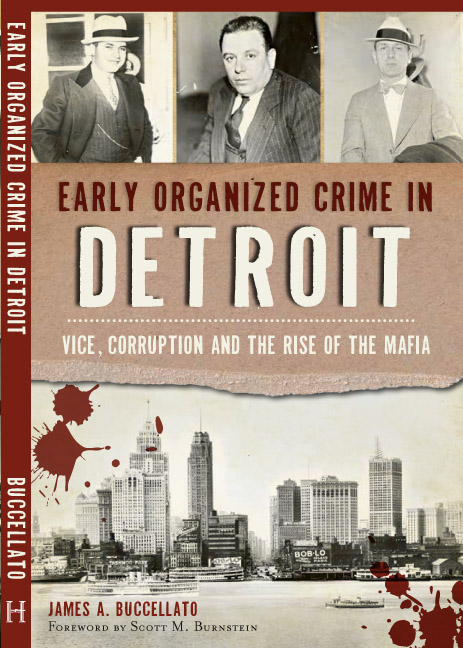 5-star review from fellow crime writer Daniel Waugh, author of  Gangs of St. Louis: “This book is an outstanding and long overdue look at the rich and often graphically violent early history of Detroit’s Mafia family. A direct descendant of some of the protagonists, Buccellato’s impeccable research and writing skills elevate this work to the upper-echelon of American true crime literature.

I don’t want to give too many spoilers away, but suffice it to say that Dr. Buccellato’s work fills a crucial gap in American Mafia history. A must read? Most definitely!”

The book is available at Detroit area book sellers and on Amazon and Barnes & Noble websites.

“Obscene Remainders: Neoliberalism and the Gang Crisis Narrative,” in The Journal of Theoretical and Philosophical Criminology

“Sign of the Outlaw: Liberal Boundaries, Social Banditry and the Political Act,” in New Political Science

Organized Crime In Detroit: Forgotten But Not Gone CBS Detroit

James Buccellato is quoted in The True History Behind Martin Scorsese’s ‘The Irishman’ in Smithsonian Magazine.

Listen to James Buccellato’s recent interview with CBS Detroit about the disappearance of Jimmy Hoffa.

“Killing Jimmy Hoffa” Documentary—James Buccellato is interviewed as an expert on Detroit organized crime in this documentary which uses exclusive interviews, never before seen news footage and photographs, and reveals the real story of the day Jimmy Hoffa died.